12 common recruiter biases to watch out for

Or how to make sure you don’t hire a candidate for the wrong reasons.

Recruiters, just like every other human on Earth, are exposed to cognitive biases. Because most biases are unconscious, they lead to errors of interpretation, perception or judgement. This is why HR professionals need to be extra careful and aware of those biases, as they deal with people in their everyday jobs. When hiring the next talent, recruiters are exposed to a number of biases to watch out for, to be as objective as possible and to bring in the best assets to their company and teams.

According to the Merriam-Webster, a bias is a systematic error introduced into sampling or testing by selecting or encouraging one outcome or answer over other.

When faced with an overflow of information to process, the brain may take shortcuts to treat it. It will hierarchize information according to personal experience, resulting in inevitable bias. This is due to memory distortions and analysis based on personal beliefs. Here are the main biases to be aware of.

How can AI help reduce cognitive bias? Our ebook teaches you everything you need to know about AI in recruiting and why it's more than a trend.

#2. When your memory plays tricks on you.

The first cognitive bias is the memory bias.

The memory bias is a result of distortions of judgment mainly due to, unsurprisingly, memory effects. When reading a CV or talking with a candidate, one tends to retain some elements more than others, thus making up an opinion that doesn’t take all the elements required to be as objective as possible.

This bias has you prefer the last good candidate you meet, simply because the interview is "fresher" in your mind.

2. The mere-exposure effect: phenomenon by which people tend to develop a preference for things merely because they are familiar with them.

This bias will make you have more positive feelings towards a candidate you have already met at a job fair for instance, than an applicant that has just entered the recruiting process.

3. Primacy effect: also known as the first impression bias or mental anchoring bias. The first information you receive will determine your general impression.

For example, if a candidate arrives late, this means he or she is not serious. Or if you judge their handshake to be a little bit weak, you might believe they lack confidence or leadership skills.

We are naturally attracted to details that confirm our own pre-existing beliefs. When making a decision, the brain needs to be reassured and will take into account what it knows. Thus, some biases are directly related to our beliefs and prejudices.

4. The projection bias or false consensus: we tend to think that most people think and reason like us, or even that they agree with us.

This bias is a problem for two reasons: a recruiter might confuse random elements such as common family values or similar hobbies, for real competence for a role. This bias is also responsible for clone reproduction in a company. For instance, one will tend to mostly want to hire alumni from their own alma mater, old white men might want to hire young white men that remind them of themselves etc.

5. Stereotyping or implicit bias: this means one will associate certain personality traits to someone based on random information, resulting in hasty conclusions.

This bias will make you say: "this candidate is in different sports teams. This must mean she is very sociable and does not enjoy working alone”, or "this candidate graduated from this top university, he will obviously be more serious than this one who has not".

6. The halo effect: close to stereotyping, one may call it the “you only see what you want to see” bias. The first impression on a candidate will have a chain effect on the subsequent interactions.

For example, this could mean that you will perceive an attractive candidate as competent, whereas someone you’ll deem less appealing to the eye will not benefit from such unfounded opinion.

#4. Biases that guide your judgment

These biases will present themselves in situations where a recruiter might want to check or validate a hypothesis they have about a candidate. They will unconsciously direct their interview questions to confirm any potential a priori.

This bias will make you ask your questions in a way that the candidate knows exactly how to direct his answer: "You know how to use Photoshop, meaning you are a creative person?" The risk here is to have your candidate say what she thinks you want her to say instead showing who she really is.

8. The contrast effect is a magnification or diminishment of perception as a result of previous exposure to something of lesser or greater quality, but of the same base characteristics.

This bias happens when you feel you’ve found the ideal candidate after an interview. The next interviews with other candidates will not be as exciting or interesting, since you’ve already made a decision. Not giving every candidate an equal chance to convince you might lead to hiring the wrong person for the wrong reasons.

In the hunt for talent, a recruiter needs to sell the position and the company to potential hires. The same is true for those potential hires and their personal brand. However, some information may be misinterpreted due to, you guessed it, more bias!

9. The extraordinarity bias: when we tend to give more value to someone who has a skill or trait that we judge out of the norm or extraordinary.

For example, one might get stuck on a candidate that speaks 8 languages or another who has cycled across Europe and prefer them over other good ones, because they are impressed. However, is this really what they are looking for? Perhaps it is, but it is important to ask the question.

10. Naïve cynicism: when emotions rule our better judgment. This bias is very common when one of the two people in a conversation is easily influenced by a smooth talker.

In recruiting, this bias is often experienced by junior employees or managers with little recruiting experience. Any good recruiter knows that each skill must be supported by proven achievements and examples.

11. The entomologist's bias: or when, contrary to the naïve cynicism, we make choices excluding emotions to guide us.

This bias leads to recruiting based solely on facts and technical elements. If you’re thinking “okay, what’s wrong with that?” you’ve maybe forgotten how important soft skills are. A candidate with excellent technical knowledge and experience with a terrible attitude or the best salesperson with the special skill of turning their environment toxic, will not do.

12. The Dunning-Kruger effect: or the cognitive bias in which people mistakenly assess their cognitive ability as greater than it is. To put it rudely, this bias is why stupid people think they’re amazing.

Knowing the existence of these different biases is a first step towards more objective recruitment. Asking yourself if your decisions are biased during a recruiting process is the next step to convincing the talent your company deserves.

Did you know AI could help with cognitive bias? Learn how EASYRECRUE uses artificial intelligence to identify best-fit candidates and download our ebook to learn more about AI in recruiting.

Published by Mathilde Brygier
on 8 November 2019

Find me on:
LinkedIn
<< PREVIOUS ARTICLE

4 tips to avoid a Talent Experience nightmare
NEXT ARTICLE >>

Measuring and boosting your recruitment ROI 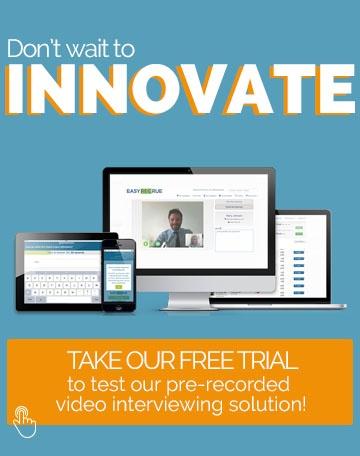